In 2007, a number of anglers reported fish caught from local rivers  with damaged and bleeding vents. The Scottish Government’s Fisheries Research Services investigated this phenomenon, which was widespread across Scotland and reported from 59 different rivers. The condition is characterised by swollen and bleeding vents in both female and male wild salmon and is commonly known as red vent syndrome (RVS). In more recent years the problem has been far less common, and RVS seems to be present only in certain runs of grilse. 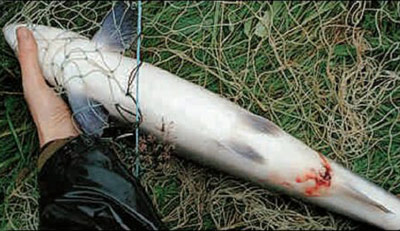 There is no evidence at present to suggest that the condition affects the survival of returning Atlantic salmon or that it impacts on spawning success. The likely cause of the condition is a nematode worm infestation and Anisakis sp. and Hysterothylacium sp., both very common parasites, have been found around the vent area of all fish examined with RVS.

The nematode has a complex life cycle with the adult worms found in seals, whales and other marine mammals. Wild salmon become infected at sea when they ingest prey items which are infected with the nematode larvae. These symptoms have not been reported in farmed Atlantic salmon or sea trout (S. trutta) and seem to be restricted to wild Atlantic salmon.

Whilst the parasite can be carried into freshwater by migrating fish, it is unable to be transmitted between fish in the freshwater environment, so it is safe to return infected salmon to the river.

Health Risk
Parasites in fish, particularly Anisakis, can, if eaten alive, cause serious health problems. Therefore, the Food Standards Agency has issued new guidance for anglers who may want to eat their own catch.

This guidance document has been issued because of an increased prevalence of wild salmon in UK rivers infected with the parasite and can be downloaded from the Food Standards Agency's website: